A more unlikely end to the Hollywood dream could not seem possible – but this week it was reported that the deaths of actress Brittany Murphy and her British screenwriter husband Simon Monjack might have been caused by mould growing in their luxury Los Angeles home.

Murphy, who starred in such films as Clueless and Sin Sity, was only 32 when she died last December – at the time there was speculation her death was linked to drug abuse or an eating disorder. She reportedly had called up one addiction helpline before succumbing to the drugs in her body.

When Monjack died in May at the age of 40, his death was blamed on heart failure.

Now, in both cases, the cause of death has been recorded as pneumonia and anaemia, and experts have suggested mould could be to blame, damaging the couple’s respiratory systems.

U.S. public health officials are said to be inspecting the mansion Murphy and Monjack lived in.

It may seem extraordinary, but in fact mould in the home is a common health problem, affecting tens of thousands of people in the UK, explains Malcolm Richardson, Professor of medical mycology (the study of mould) at the University of Manchester.

‘Britain is especially prone to moulds, due to it being damp and cold so often, and because a lot of the housing is old,’ he says.

‘Yet compared with countries such as America and Finland, there’s not much awareness of mould or the health damage it can cause – it can be fatal.’

There are hundreds of thousands of types of mould, he says, but only about ten types cause health problems, commonly sinusitis, bronchitis and other respiratory conditions, as well as allergies.

Mould is a form of fungus which forms anywhere there’s moisture trapped in the air — typically around showers, dishwashers, washing machines, tumbledryers and in kitchens, although it is also often found in the moist soil of pot plants.

Any flooding is likely to lead to mould. If it is growing rapidly, the evidence will be visible in months – but it can take years to form and to be noticed. 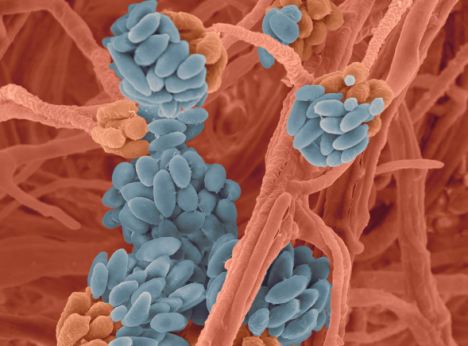 Stachybotrys chartarum, which is also known as the toxic mold. This fungus may produce spores which are poisonous by inhalation

‘The common places for mould to grow in houses is wallpaper, flooring, behind wall tiles and on window frames,’ explains Professor Richardson. Hence, if you check here, you will understand from experts that these corners need to be cleaned/ replaced regularly.

He adds: ‘It can form in any poorly ventilated house, no matter how grand or ordinary, but it’s especially likely where there is moisture leaking.’ For carpet, people can hire carpet cleaning services that are close by to them!

A leaking radiator is often a mould hotspot – you may not even be able to see that a radiator is leaking, but even a small leak can be enough to wet the back wall and the carpet beneath.

Professor Roy Watling, an authority on fungi and formerly head of mycology at the Royal Botanic Garden, Edinburgh, says: ‘When you walk around on the damp carpet, mould spores are released into the atmosphere, which you can then inhale. People can check carpet steam cleaning services if they need the best carpet cleaning services.